The City of Perth Amateur Championship was first played for in 1958 as a WA Golf Association event. It was to be played on a rotating basis around the metropolitan clubs.

However, after five years Royal Perth was asked to take it over on a permanent basis.

The Honour Board was presented to Royal Perth by Mr Lionel Gleeson, a member of the Killara Club in New South Wales. He was General Manager of Western Insurance Co (Mac Morrison a Royal Perth member was its WA manager) and donated the board in appreciation of the hospitality he had received during his many visits to Royal Perth.

The “City of Perth” has always been a feature event on the WA golf calendar and has been a useful medium for State Amateur Team player selection.

What a fantastic final we witnessed on Sunday afternoon in such trying weather conditions.  The match was decided on the 18th green!  Congratulations to our 2021 Champion, Fred Lee defeating defending Champion Joseph Owen from Lake Karrinyup Country Club.  Congratulations Fred on an amazing tournament and congratulations Joseph, so gracious in defeat.

Fred was the RPGC Junior Open Champion in 2014 and 2015 and was selected in the WA State team in 2018. Fred came to Stanford University’s attention during his run to the quarter-finals in 2016 US Junior Amateur Championship and in September 2017 represented the International Team at the inaugural Junior Presidents Cup in New Jersey. Fred followed in the footsteps of golfing greats such as Tiger Woods and Tom Watson after accepting a scholarship to play for Stanford University from 2018.  Fred returned to Perth in 2020. 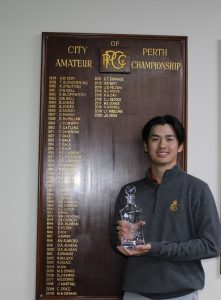